In the past days and weeks, the Alpine regions have attracted numerous winter sports enthusiasts to the Swiss ski slopes with bright sunshine. The list of ski resorts in Switzerland is surprisingly long, and between 20 and 25 million winter sports enthusiasts from Switzerland and abroad are attracted to the white, perfectly groomed pistes every season. Despite the decline in overnight stays in the Alpine regions at the end of last year, a study commissioned by SECO shows that the ETH Economic Research Centre is optimistic about the 2016/2017 winter season, which is still in progress. The research centre assumes that overnight stays in the Alpine regions will increase slightly compared to the previous year and that more domestic guests will spend their winter holidays in the mountains again.

The list of the most important Swiss ski resorts today includes a proud 62 winter sports destinations and the majority of the areas are over 1000 m.a.s.l. This gives these ski resorts a great advantage in terms of snow reliability. Winter sports enthusiasts can ski down the white slopes every year until mid-March and sometimes even until April. Around 2,452 cable cars and ski lifts ensure transport to the ski resorts in Germany. In the most important Swiss mountain regions, over 7000 kilometres of pistes are regularly levelled and prepared for the ultimate carving experience in the winter season. If you limit yourself to the most important or larger ski areas in Switzerland when counting the number of kilometres of pistes, you get a figure of around 4999 kilometres. Graubünden and Valais/Vaud will then be among the ski regions with the most kilometres of pistes. In the current winter season, however, snowfall almost took until January 2017. In December 2016, the mountain regions recorded a decrease in overnight stays of between minus four and minus seven percentage points compared with the previous year, which the Swiss Federal Statistical Office attributes among other things to unfavourable snow conditions.

Reto Knutti from the Institute for Atmospheric and Climate Science (IAC) at ETH Zurich states in an interview with the NZZ that the snow line in Switzerland has increased by 300 metres since observations began. According to Knutti, this snow line will rise by a further 500 to 700 metres by the end of the century if climate change continues. This would be quite fatal for ski resorts in middle altitudes between 1000 and 2000 metres. Already today, around 50 percent of the ski slopes in Switzerland are covered with artificial snow. In Italy and Austria, this figure ranges between 60 and 70 percent, as the winter sports destinations there are in some cases somewhat lower than the Swiss destinations. Until the beginning of the last century, snow-making systems were not an issue at all. At that time, the question was rather: How can winter sports enthusiasts be transported to the ski resorts at all?

One of the first ski lifts to save skiers the hassle of climbing the mountain was opened in 1934 at Bolgen in Davos. The Zurich engineer Ernst Gustav Constam applied for a patent in 1930 for his towing rope system with hoisting rope. Together with the Davos hotelier and farmer Leonhard Fopp, Switzerland's first iron-on lift was built on his property. As of December 1934, ski enthusiasts were able to overcome a proud 60 metres of difference in height over a total length of 270 metres with the J-shaped single handle. The drive for this undertaking was provided by a 24 hp electric drive. Already in the first season, the innovative Bolgenlift transported 70,000 skiers - an incredible success. Soon the single brackets were replaced by all known, T-shaped, orange-black ski lift brackets and the transport capacity could be massively increased. Winter sports resorts such as St. Moritz or Mürren took over the transport technology and the Constam ski lift system became an international bestseller.

Winter sports remain a challenge in terms of transport logistics and not only take up a lot of space topographically, with thousands of kilometres of pistes, but also a lot of space within your own four walls. Anyone who dares to ride the fast boards under his feet needs good, safe equipment, a not too empty purse and a bit of fitness, but above all one thing: storage space in the apartment or cellar compartment to store all the winter sports equipment. Helmet, skis, ski poles, snowboard, boots - all objects that are not necessarily suitable as decoration in the living room. But if you prefer to make room for your wine cellar or other hobby in your home cellar or garage, you can store your winter equipment in a placeB self storage unit. placeB offers flexible storage space in which the snow sports equipment finds a video-monitored, dry and smart home during the coming spring and summer months ( ❯ How to rent a storage room ). Your smartphone is the key to more basements and your seasonally stored winter sports equipment!

To take with you or to throw away? To store! 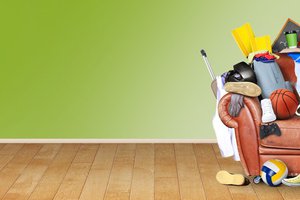